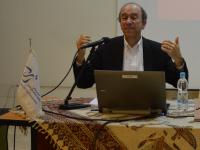 Since climate change has turned to an important issue among the states and international organizations specifically the United Nations in recent years, and also due to the importance of the “Paris 2015 climate change agreement” and its prominent role to form a new framework for cooperation to stand against challenges and threats encountered by climate change to the entire planet, the Iranian Association for United Nations Studies (IAUNS) as a pioneer scientific organization for UN studies in Iran has held two expert sessions in this field.

Dr Mohsen Abdollahi (Shahid Beheshti University), Dr Masoud Faryadi (University of Mazandaran), Dr Ali Mashhadi (University of Qom) and Mr. Javad Amin Mansour (practitioner of climate change and former diplomat) were presented their opinions and views about the “Paris 2015 climate change agreement” and other instruments like "Kyoto Protocol" in this event which held on February 17, 2016.

At the first of the session, Professor Nasrin Mosaffa, who is the chair of IAUNS and also a faculty member of the University of Tehran, in referring to the death of Boutros Boutros-Ghali, who was the sixth Secretary-General of the United Nations (UN) from January 1992 to December 1996 and passed away aged 93 on 16 February 2016, has dedicated some minutes for his commemoration. She mentioned that the United Nations Framework Convention on Climate Change (UNFCCC) was concluded in Boutros Boutros-Ghali’s duration in 1992 and it was the first intergovernmental step to tackle the challenge posed by climate change.

The other event titled "Climate change from the perspective of "The United States' law and policy" and "The Paris 2015 climate change agreement" and relationship between them" was held on March 6, 2016.

In this event, Professor Richard Lazarus (Professor of Law at the Harvard Law School), who is an expert in environmental law, natural resources Law, Supreme Court advocacy, and torts, has presented his lecture in three parts:

These three topics and their relevance with the Paris 2015 climate change agreement have been explained by Prof. Lazarus during the session.